A1 Sporting Memorabilia met with Steven Gerrard on 05/02/2015 in Liverpool for another major signing session with Liverpool’s greatest ever player. 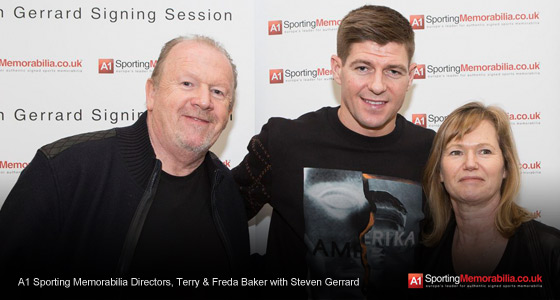 Lots of new products including a stunning new Liverpool football, a career montage signed photo, a beautifully embroidered special edition 2014/2015 season shirt, various football boots all signed by Steven who as you know by now, signs exclusively for A1 Sporting Memorabilia. We have been working with him for six years and during that time we have contributed considerably to his foundation and yesterday we made another significant contribution.

Although he is going to play for LA Galaxy next season, we will still be seeing him to continue to sign Liverpool items and after May we will of course be the first to bring you La Galaxy shirts as well. We are pleased to have been invited by Steven to visit him in LA and although it’s a long way to go for signatures and quite a hardship, Freda and I will be making the sacrifice and going to LA later in the year!!

In the meantime we hope you like the new products.