The first in our series of Gazza and Greavsie shows was a great success. Jimmy is on top form as always and had the audience laughing.

Paul was a revelation on stage joined with A1 Sporting Memorabilia director Terry Baker. “I didn’t really know what to expect but he was funny , never short of something to say and the audience loved him. With respect to the current England players, seeing Gazza back in top form telling stories made me realise that I was onstage with the best footballer of his generation and what a great player he was. So much better than anyone since and how we miss him.” said Terry Baker. 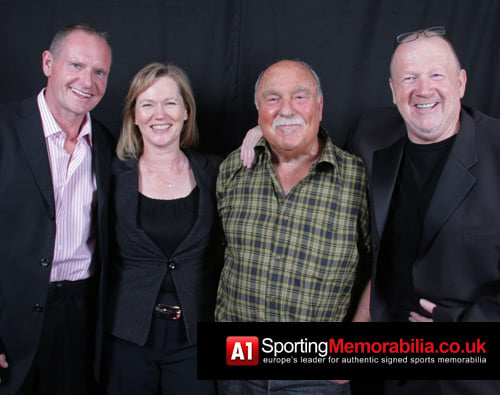 See Gazza & Greavsie on tour – VIP ticket gets preferential seating and your photograph taken with Gazza before the show.

For more details about the show and to book tickets visit GazzaShow.com.

It is a pleasure to tell you Paul is in great form. Book him at A1 Sporting Speakers.

“Freda and I are delighted to be promoting the Gazza and Greavsie show. See it while you can.”