A tribute to the late, great Sir Henry Cooper

We were devastated to hear the sad news that our great friend Sir Henry Cooper had passed away at his son Henry Jnr’s home whilst watching Arsenal v Man Utd on Sunday May 1st 2011.

Henry was the most genuine and loveable man I probably ever met. Nothing to do with his star status and reputation, my affection for Henry was because he genuinely was the nicest , most huggable man.

We did about ten theatre shows and countless dinners in the last ten years. The public loved him and he had time for everyone that crossed his path. He was very funny on stage with a wealth of great tales to tell, when I feel less emotional, I will get round to telling a few Henry gems.

The last few times we saw him, I had the feeling he thought it would be the last. As well as his kiss for Freda, I got a big hug and I hated letting him leave to go home in case he was right.

The country will never see his like again and we will all be poorer because he has gone. Our thoughts are with his family particularly Henry Jnr who has looked after him so well since his beloved Albina passed away suddenly in 2008.

They can all take comfort in the thought that their dad or granddad was one of the most loved men in the country for nearly 50 years. Two days before his 77th birthday, a great man and a lovely friend has gone. May he rest in peace.

Our deepest condolences to the Cooper family from Terry & Freda Baker and all at A1 Sporting Memorabilia.

As a mark of respect all our Henry Cooper signed memorabilia will be suspended from sale and marked as “Sold Out” on the website until further notice. 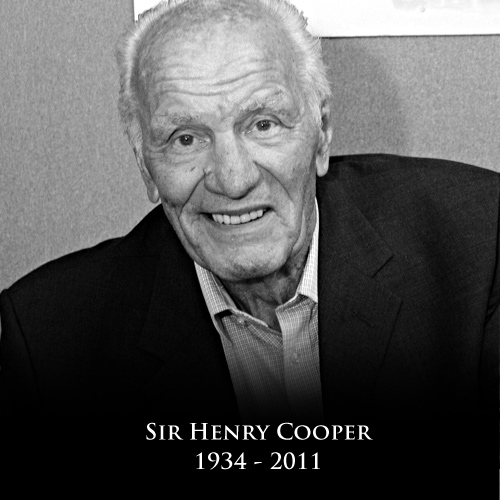