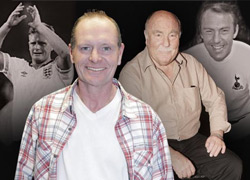 The matching of Greavsie and Gazza on an A1-promoted countrywide tour is a masterstroke, bringing together two of the finest and most famous (some would say infamous) footballers in the history of the British game.

Greavsie, in his days as a hugely popular television personality, spotted the potential of Gazza the player earlier than most. He brought him to the attention of Saint and Greavsie viewers in his Newcastle career, calling him names like Mars Boy and Fatboy. It was all said with affection, Jimmy pointing out that he had extraordinary skill and potential.

Paul went on to become the most entertaining footballer of his generation, being idolised at each of his clubs, notably Newcastle, Tottenham, Lazio, Rangers, Middlesbrough and Everton.

He became a national treasure during the 1990 world Cup finals in Italy, earning wide applause and appreciation for his performances and sympathy for his tears when he cried as England made a late, dramatic exit.

Another (sadder) coincidence is that on their retirement from playing both Gazza and Greavsie had problems with alcohol. Showing enormous character, Jimmy beat the bottle and has been ‘dry’ since way back in 1978.

Gazza has found the fight much harder, but we are delighted to report that he has been sober since before Christmas and everybody is behind him as he marches forward on the recovery road.

Both Jimmy and Paul have fascinating football stories to tell, and their no-holds-barred question and answer sessions at their shows are certain to be absorbing, amusing and, no doubt dangerous!

This will be the Tour of the Year for football followers, and tickets are certain to be in high demand. So get in early. For full details go to www.GazzaShow.com.